You may remember that I announced my intention to complete the open cluster program this year. Well we’re a couple of months in and a few things are clearer to me now. And that year’s seeming short than I’d expected.

When is a group of stars a cluster?

As a relatively new observer I’m used to open clusters like M37 which, courtesy of Stellarium, looks something like this.

They’re pretty obviously a cluster of stars aren’t they, so no problem there, even I can find that as long as I’m looking at the right one.

Unfortunately they’re not all like that. I was looking for NGC1662 last night in Orion, and it turns out to look like this. 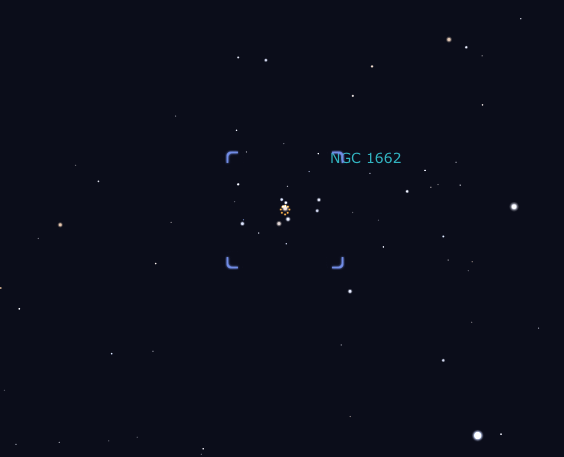 Now I found it, and it looked very much like that, but it wasn’t what I’d expected. I’ve been trying not to cheat by looking up the clusters ahead of time in case that distorts my observation. But you do need to know what you’re looking for.

This gives me a headache: when do a few nearby stars actually become a cluster?

In order to complete the program, I not only need to draw some of these clusters, but I need to classify all of them. To do that I’m going to need to answer my own question. Practice anyone?

This is my third year as an astronomical observer, and I’ve decided the time has come to kick off a few projects aimed at improving my practical skills.

The Astronomical League have some fantastic material and programs that are available online, even to non-members. I wish British astronomical organisations were more like their American counterparts (a discussion for another day).

Anyway, the program that’s caught my imagination is the Open Cluster Observing Program which provides a list of 125 objects from various catalogues, most of which I’ve never encountered. I’ve decided the best, and most obvious, place to start is the Basic program which states the following requirements.

I don’t believe there’s a deadline. I’m only doing this for my education and entertainment, but I’d like to try and complete the program this year. So the plan is to start with some of the open clusters listed for Taurus, Orion and Monoceros before they’re gone in Spring.

Why open clusters? Simple really, they’re one of the few features of the deep sky that are reasonably visible in the suburban night sky, and some of them are quite spectacular.

It’s suggested that using the same telescope with a limited range of magnifications gives the observer a better appreciation of the differences between these clusters.

I’d estimate that there are about 30 clusters on the list the I’m going to struggle with because of their low altitude. That’s not good since I need to view 100 out of 125 to complete the basic program. I’m going to have to move about to bag a few of the tricky ones.

A small telescope like my SW Explorer 130P on an Alt-Az mount is relatively portable, and I don’t have anything with more light grasp, so that’s the one I’m going to use. I’m going try and stick to 50 and 100 times magnification depending on the actual object.

For the drawings I’ll try and stick to high altitude objects and switch to my heavier equatorial mount. It’ll be much easier to track them whilst I draw.

What am I hoping to gain?

I’m not a member of the Astronomical League (yet), so I’m not eligible for any awards, so that’s not the focus here. If you’re anything like me you tend to find your target, give it a minute or so, and move on to the next. For me getting past this behaviour is the main point of the project.

You remember they said observe? Well that means making notes with descriptions as well as the classification. It’s very hard to describe or draw an object accurately without really studying it in the eye piece.

I think programs like this one will make me a much better observer, and possibly one day an astronomer.

Disclaimer: the views expressed here are those of a visual observer… there are many talented astrophotographers out there, but I’m not one.

Whilst it’s possible to get surprisingly good astronomical images by sticking your phone up against the eye piece there are limits. If you want to push them things can get very expensive, very quickly.

The mount is typically the first upgrade. If you can’t align the mount, rely on it to track smoothly, and be rock solid whilst doing it, you’re likely to get disappointing results.

Then there’s the camera. Deep-sky images of smaller, fainter objects require a CCD sensor because they’re more sensitive than those in your DSLR, and it won’t hurt if it’s cooled to reduce noise. Add a guide scope and camera, and then you can worry about the imaging telescope itself.

See, expensive, but it’s not the expense that puts me off.

The practicalities of suburban life.

I’ve got a small garden that I have to move around to find a place where I can see my target. Finding a place for a permanent observatory isn’t an option. Without one setting up an imaging rig is not for the fainthearted under poor british skies. I don’t want to spend half the evening setting up just for the rain to arrive.

Besides, I wouldn’t be able to resist just popping an eye piece in the focuser and then the night would be over for imaging.

So for those occasional deep-sky images and photometry – more on that another time – I’ve signed up to try the remote robotic telescopes of the iTelescope network via their free demo account.

Most professional observatories are used remotely and are essentially robotic (no people involved). They’re often in ridiculously remote locations to get the best observing conditions, and the scientists that use them would prefer not to be there for various reasons.

Robotic telescopes are becoming more accessible to amateurs too via services like iTelescope. That’s right, it’s not the only one, just the one I chose. The scopes, mounts and other hardware offered are exotic, much more so than most of us could afford. You’re paying for the opportunity to take control of this kit, as iTelescope puts it

The entire iTelescope system is controlled via the Internet. Nothing more than an Internet browser is required to remote control the telescopes.

but it provides all the same output data that you’d get from the same setup in your garden.

It’s the advanced imaging experience without the hands-on hassle. Is it proper astrophotography though? I’d say yes… and no.

Planning your imaging session is still vital: where is the target in relation to the Moon; when is the best time to start the run; how many subframes and filters, and how long should each exposure be? And post processing the raw data from the downloaded fits files with your favourite software is the same.

But if you feel astrophotographers need to know how to get the best out of the physical equipment, obviously this type of service will fall short. I think it provides great opportunities, but it won’t make you a skilled astrophotographer.

As I’ve explained, I don’t want the hassle of complex equipment, and I’d rather spend more time at the eye piece. The opportunity to image objects during the day or that are only visible from the southern hemisphere – these robotic sites are in the USA, Europe and Australia – is a great attraction too.

The free demo only allows me access to two telescopes that’ll take a single colour image of one of a selected range of objects. I chose to use the telescope in Siding Spring, Australia and try imaging the eta Carinae nebula (NGC3372) because you can’t do that from the UK.

One Click imaging is as simple as it sounds: log on to the telescope in the browser, find NGC3372 in the list and click the button next to it. This runs a script to align the scope and take a 10 minute exposure. The result is emailed to you as a relatively low resolution jpeg file like this one. Personally I don’t think that’s too bad considering the limitations of the demo account. It’s certainly tempting to upgrade for access other telescopes and more sophisticated imaging options. I’m also interested in the possibility to link to the AAVSO VPhot photometry tools for variable stars, but that’s another story.

My name is James Whinfrey and I’m in my third year of amateur astronomy in the UK where it’s wet and cloudy.

I’m not sure why I started, other than the first BBC Stargazing Live, but I’m very glad I did, and I’m hoping I can convince others to have a go too.

I’ve progressed from clueless staring into an eye piece to moderately more-knowledge-than-none and a member of several organisations including a local astro society in Northampton.

I love observing double and variable stars – of which I regularly submit observations – and I’ve several new projects lined up for this year.

And for a first post my choice of title tells the story.